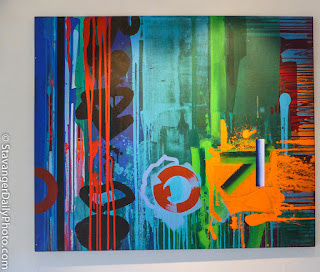 Terry Nilssen-Love was born in England, but has been living in Norway since 1974.
His art has been seen in many art galleries and he has also worked at the art school here in Stavanger.
Take a look at his web page. http://terrynilssen-love.com

You can find more of his work at Kunstgalleriet.
Posted by Gunn at 09:24 8 comments: 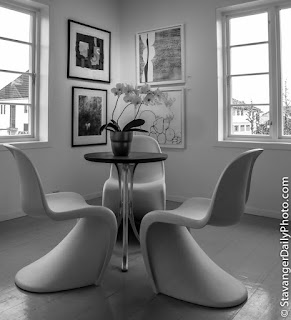 A nice corner of the first floor at KUNSTGALLERIET at Madlaveien.
They have quite a range of work from famouse artists, some foreign and some Norwegian.
It is walking distance from the city centre.

Take a look at their webpage: www.kunstgalleriet.no 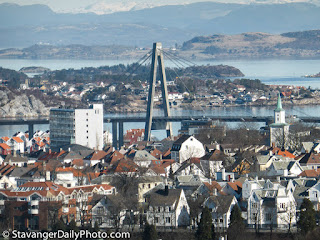 Another view from VÅLANDSTÅRNET.
This time towards the city bridge and the old church FRUE KIRKE, (Hetlandskirken)
Posted by Gunn at 09:03 10 comments: 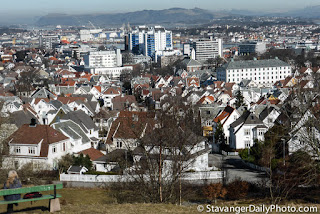 A view down to the city centre of Stavanger, taken from VÅLANDSTÅRNET (Yesterdays posting).
It includes the fjords and mountains a bit further out.
Posted by Gunn at 16:15 10 comments:

VÅLANDSTÅRNET is open on Sundays. 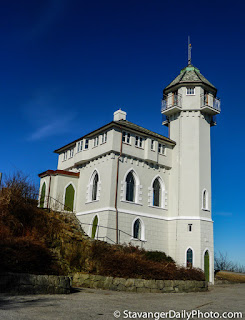 It has taken years and more than 7 million Norwegian kroner to redecorate and restore VÅLANDSTÅRNET to a beautiful updated standard again.
Well done to the people who put the effort and time into the project!

Every Sunday there is a small cafe that is open, and you can actually see Stavanger in 360 degrees from the top of the hill, as well as half of the surrounding county . What a view!

It has a long and interesting story, but to make it short I can just mention that it used to be the location for the city`s first pressurised water reserve, the fireguard/firewatch has been located there, as well as a restaurant in it's previous history. It was built in 1895, the way it looks now, and it is situated 84 meters above sea level.

During the occupation in 1940 the building was taken over by German soldiers, who used it as an observation tower.

It is within walking distance of the city centre and there are several nice places for walks nearby.
The tower is rented out to clubs and businesses, but so far, not for private parties.

My friend said; "imagine the number of tourists who would have rented a room here, if they had included a few rooms or a tiny flat in the tower..." 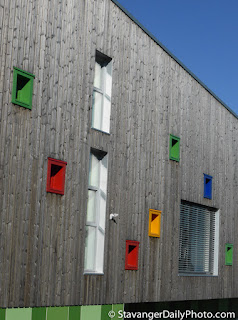 Many of the new kindergardens have some interesting architecture and colourful details.
Some might call it a Nursery, play school or pre-school. It depends on where you live.
(In Norwegian it is called BARNEHAGE, directly translated it is : children's garden.) 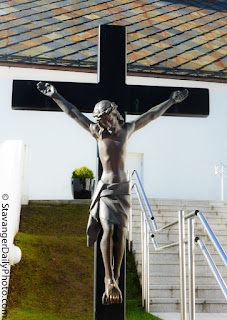 Good Friday is a Christian religious holiday, commemorating the crucifixion of Jesus Christ and his death at Calvary ( Golgata)

We call the day Langfredag, ( Long Friday), and in countries with mainly Christian People, it is a a Holy Day, and part of the Easter holiday.

The image is taken outside the St. Svithun Catholic Church here in Stavanger.
Posted by Gunn at 07:59 5 comments: 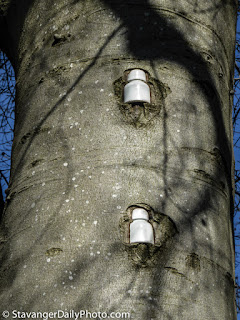 Some electrical insulators in the tree.
It is strange, isn´t it?
Perhaps some old electrical cables were once attached to the side of the tree and the tree grew into them? 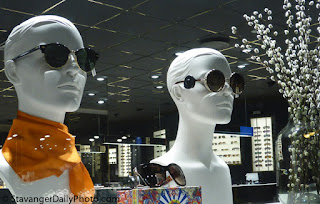 It looks like we will have a nice SUNNY day in the Stavanger region today.
So find the sunglasses - and enjoy the Easter Holiday!
Most offices & shops close early, and many people go away for the holiday.
Posted by Gunn at 07:10 5 comments: 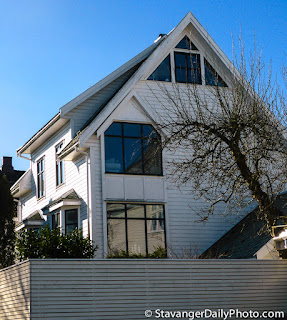 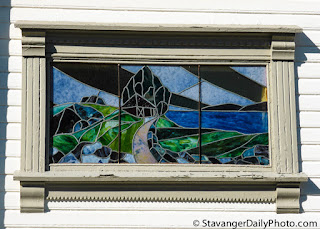 It is not common to see artistic stained glass windows here in Stavanger.
So today I want to show you one of the few.


We have some churches who have them, but it is in England , mainly in and outside London, where I have seen so many front door windows decorated so nicely.

Perhaps it is a technique not many can do any longer?
Posted by Gunn at 08:38 6 comments: 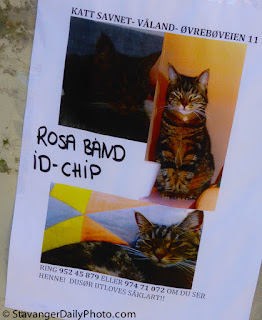 I hope the missing cat is back home again! 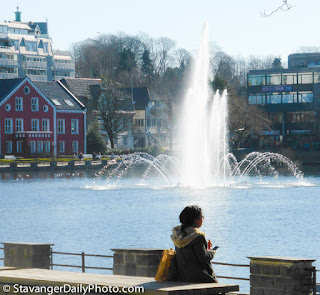 Many people have taken a few extra days off work and have already gone away for a long Easter -  Holiday - Week, either to cottages up in the mountains or somewhere along the coast.

We have been lucky with the weather, also those who are further south and in and around the Oslo area. 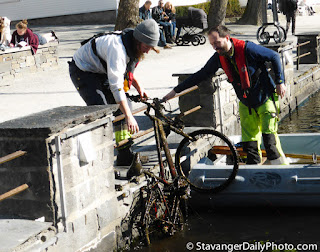 I am not sure if it can be called spring cleaning, but a couple of people were busy tiding up the little lake, Breiavatnet, at the city park....

Look what they found!

I guess it will be more safe for all the swans who are now out and enjoying the sun and the nice temperatures. 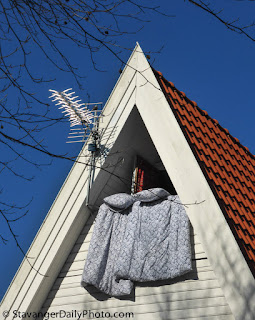 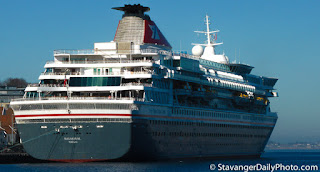 It is the first cruise ship I have seen this year.
Mainly British passenger who visited Norway, as far north as Alta. But today it was not the Northern Lights, but our town Stavanger they visited,  before heading back to Southampton this afternoon.

A bright sunny day, and I guess they have seen plenty of places with snow up in the mountains.
Posted by Gunn at 18:00 4 comments: 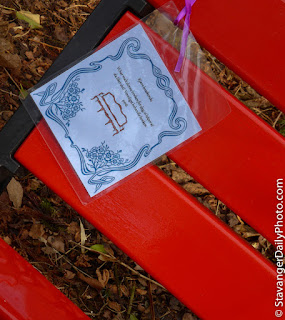 At the Botanical Garden they have now put out some bright RED painted benches. Enjoy!
Posted by Gunn at 10:22 8 comments: 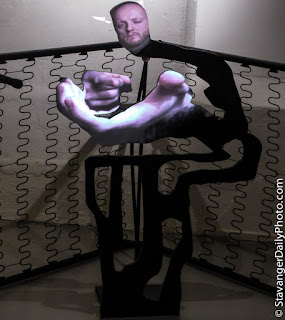 I guess some of you who follow my blog, already know that I like to go to exhibitions to see and explore new things.

So far this year I have to say that this installation by ARNE NØST at Hå Old Vicarage is the most amusing and creative artwork that I have seen.

Arne Nøst is born in 1962. He is educated as a Graphic Designer and also works as a director at Rogaland Theater.

The installation (and this picture in only one of several), is called NO, Video/Sound/Sculpture.
Posted by Gunn at 05:34 4 comments: 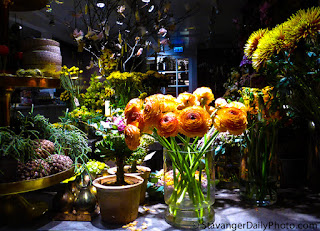 I hope you remembered to buy yourself (or perhaps to someone else) some nice flowers this weekend.

Yet another shop has closed. 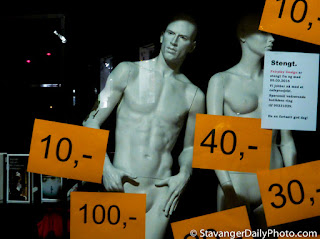 Yet another shop has closed.
Posted by Gunn at 16:23 5 comments:

Villa with a view. 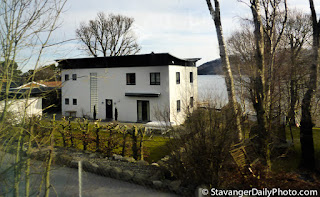 Lucky house owners who have a house and a garden straight down to the Gandsfjord.
Posted by Gunn at 00:05 10 comments: 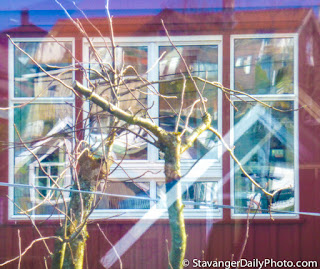 At the old market place. 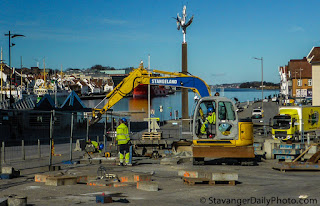 Work going on at the old marked place.

Out in the lake.

Todays model seen at the little lake, Breiavatne, at the citypark. 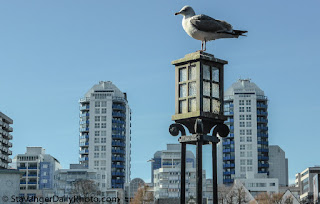 Cold outside and cold inside. 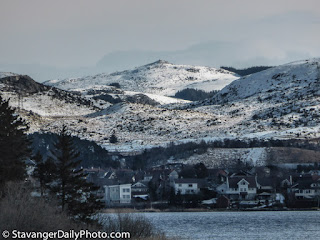 It is cold outside, and it is COLD inside.
Well not COLD, just me that has got flu and fever. 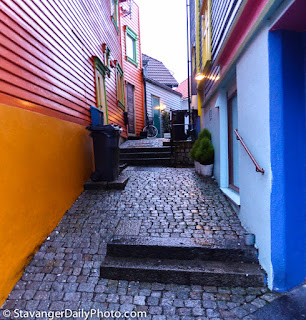 A little colourful alley off of FARGEGATEN.
Posted by Gunn at 16:24 10 comments: 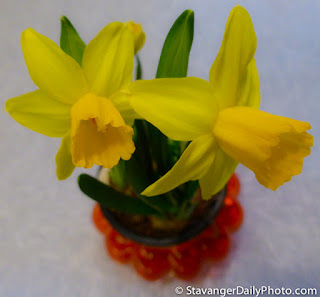 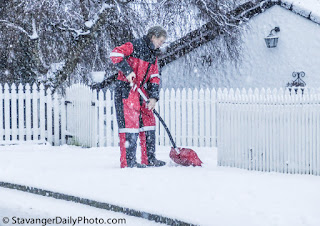 As a house OWNER in Norway, you have to keep the pavement clear. It does not matter if the building is a shop or have offices, it is the owners duty to make it safe.
That includes also safe from melting snow or ice, from the roof too. 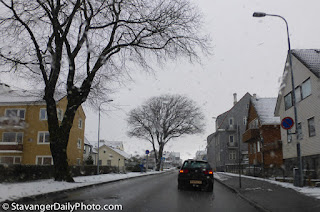 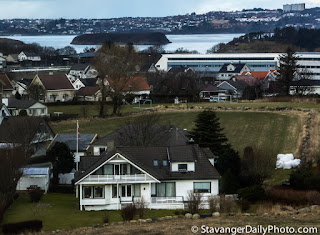 A view from the 10th. floor at the Clarion Hotel Air.
Hafrsfjord and the area around Sola.
Posted by Gunn at 22:19 6 comments: