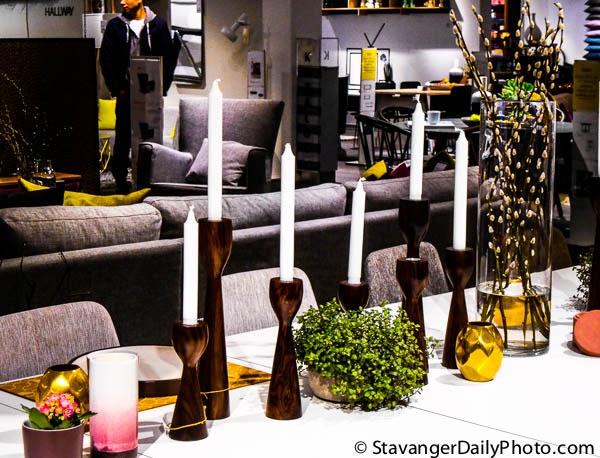 It looks like the "in"colour is GREY in furniture shops these days.
A bit of retro and industrial design too. 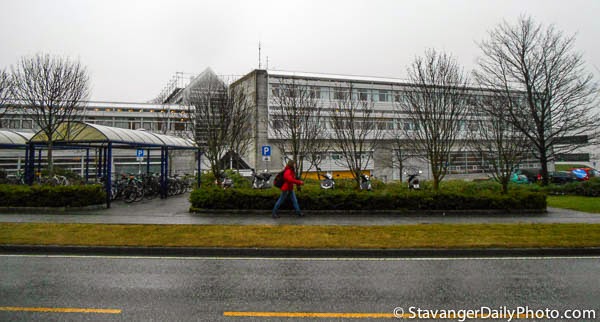 What is worth demonstrating for? 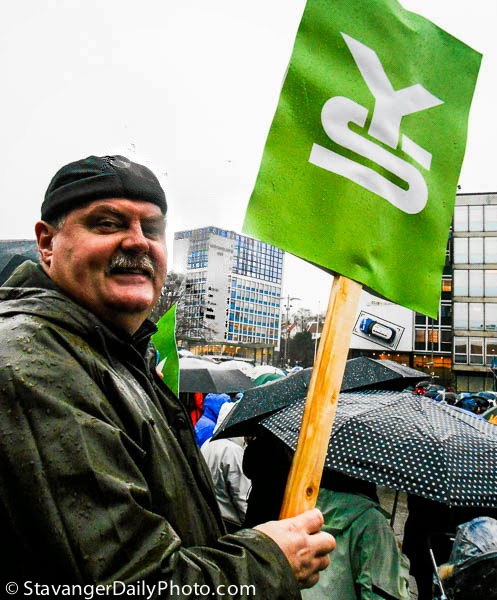 Yesterday thousands of people were on strike and demonstrating to say a big NO to the new regulations that will change employees conditions for the worse!

I hope the politicians will know what to vote for!

SO WHAT IS WORTH DEMONSTRATING FOR??

Do you remember Paris a few weeks back??


But locally there are situations like:
An unsafe road where kids are going to school?
Local hospitals closing down?
An industrial company that the owners are selling, and will be moved out of the country?

I think STRIKING/ DEMONSTRATIONS are a democratic right that is important!!

Have YOU been out striking? 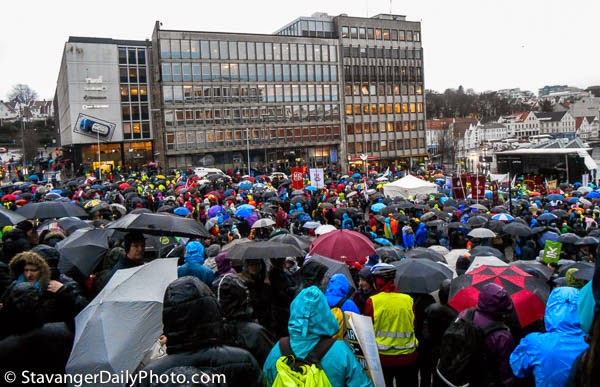 It is a long time since I have seen so many people at the old market place in Stavanger.
We had a legal strike today all over Norway.
More than 1,5 million people, members of different unions were out in a political strike between 14:00 and 16:00 this afternoon. It is difficult to say how many took part here, but as you can see, it was quite crowded.

The rain was pouring down and it was cold, but I think the politicians representing the Stavanger region received a clear message, and I hope that they will take what they saw and the appeals that were made,- back with them back to Oslo.

The working conditions / rights, are rapidly changing. Fewer permanent jobs, and then of course more people who are not able to get a bank loan without a permanent job.

Today,  planes, busses and trains stopped for an hour or two.
Nurses, teachers, scientists as well as engineers were out demonstrating.

What I remember the most was :

"You should not endure the injustice that does not concern yourself".

It is an old saying, but still so true! 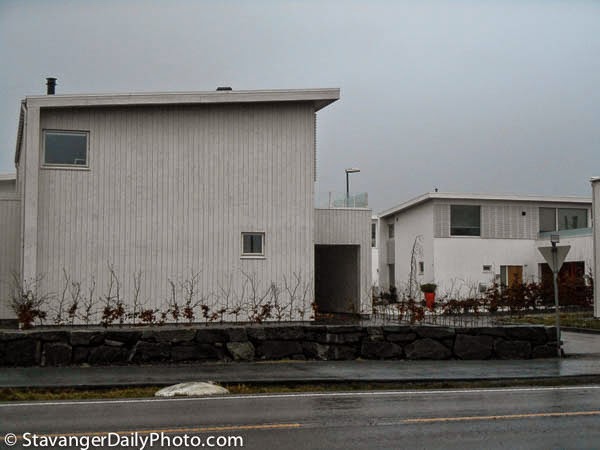 Modern houses at the Sola area. 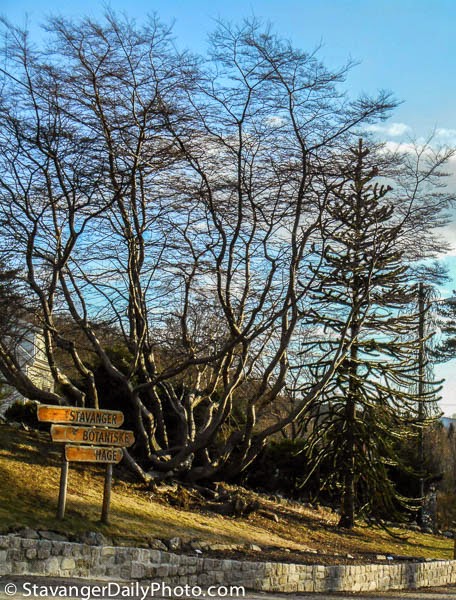 At the Stavanger Botanical Garden.
Posted by Gunn at 18:10 8 comments:

A walk around town. 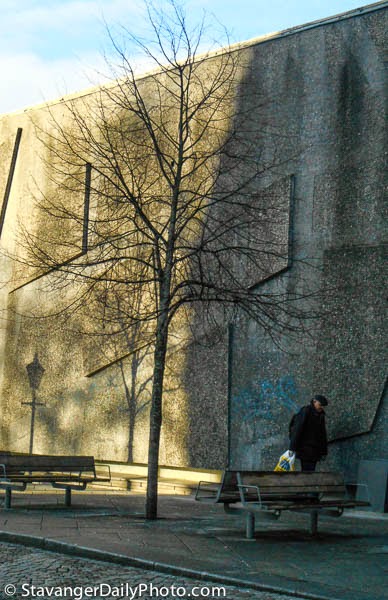 Mummy Bente,
had a stop at a coffee place today with her two daughters Christine and Camille (to the left)

Nice to meet you! 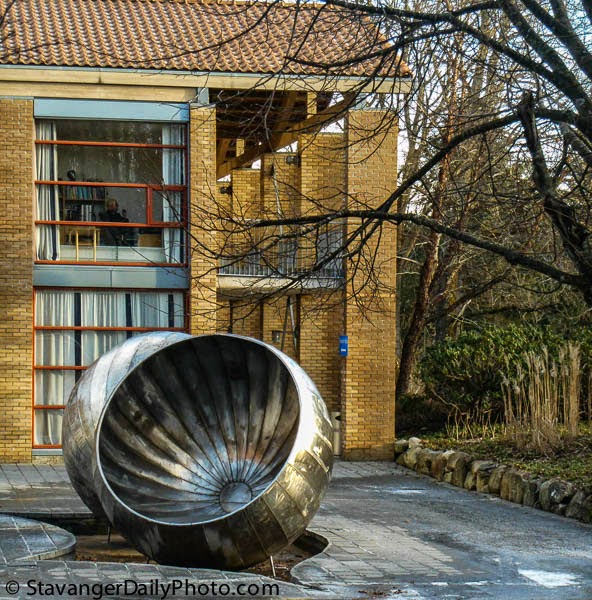 I like the fact that there is ART by different artists around in public spaces,

like this, outside one of the buildings at the University.

Unfortunately, I don't know who the artist is, but when I find out I will add it on this posting.
Posted by Gunn at 18:06 9 comments: 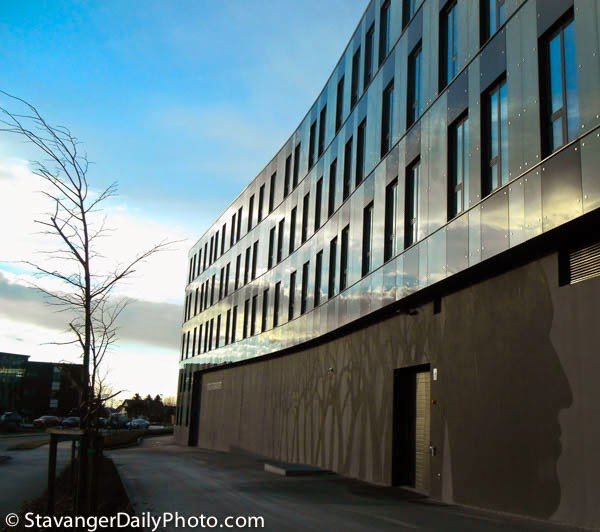 Even buildings look different when walking by instead of driving past.
Do you see the artistic wall?
This is the Norwegian Petroleum Directorate. 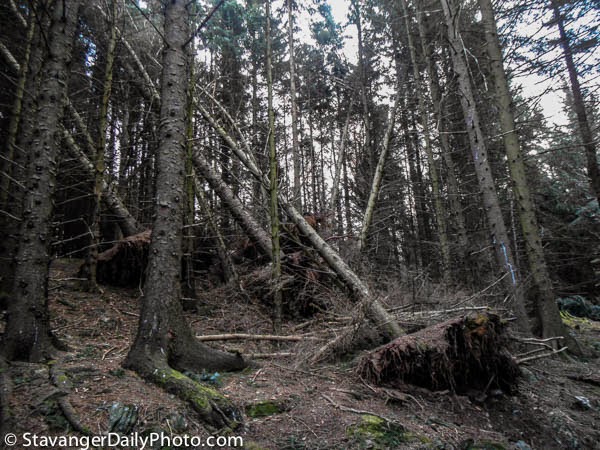 Damage after the storm last week.... 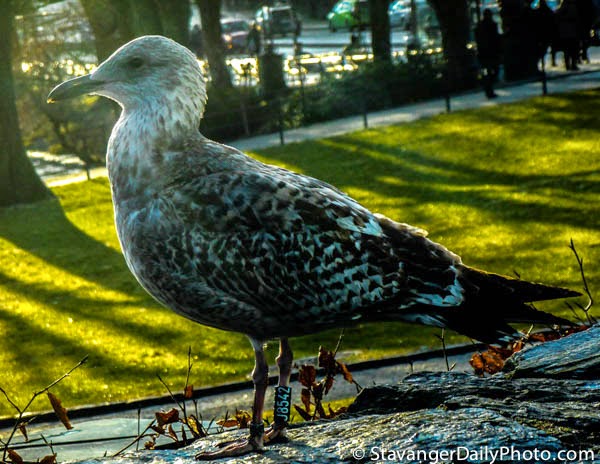 My model today did not care whether or not I wanted to take a photo.

It is a nice sunny day today, lots of people in the park area, and perhaps some food to be found??
Posted by Gunn at 15:03 7 comments: 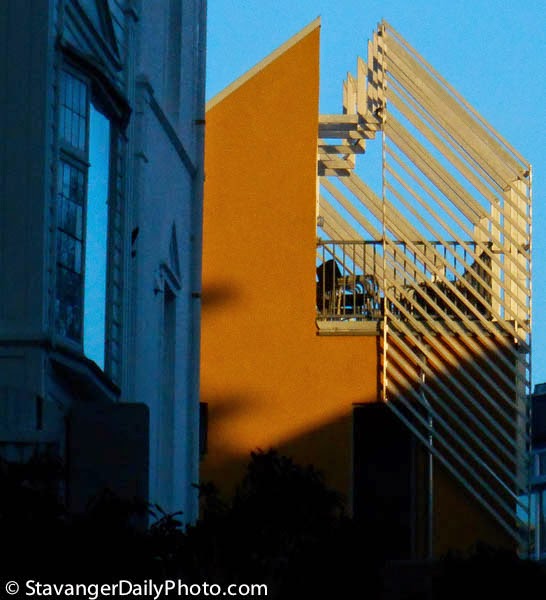 When I was walking in town around 10 o´clock this morning, I suddenly saw this colourful house in the middle of grey office buildings and white wooden houses.

It brought back memories from places further south in Europe.

Lucky people who have a terrace and a view like this in the centre of the town! 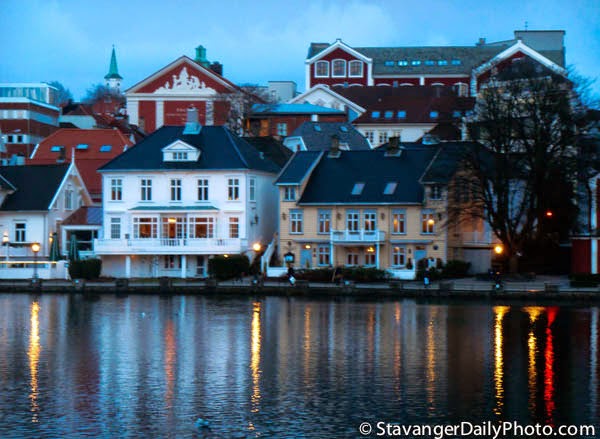 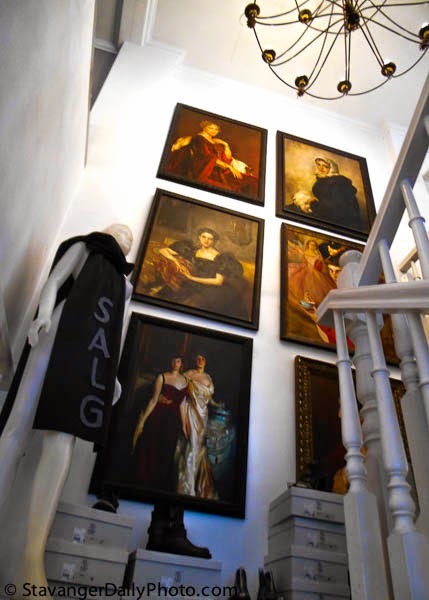 Some shops have more style than others. 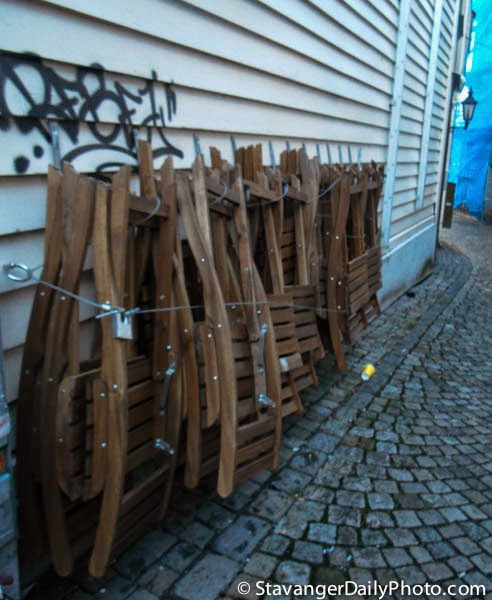 Is he back again, the REBEL,
who for years has put his signature all over the city?? 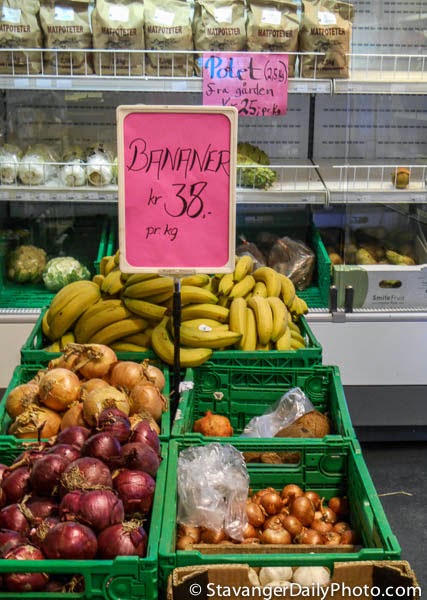 I had a look inside the shop on the farm, see the posting from Tuesday.
Lots of interesting things, but when I looked at the prices it was "simple maths" to find out that the food costs were nearly twice as much as what the big shops can offer. 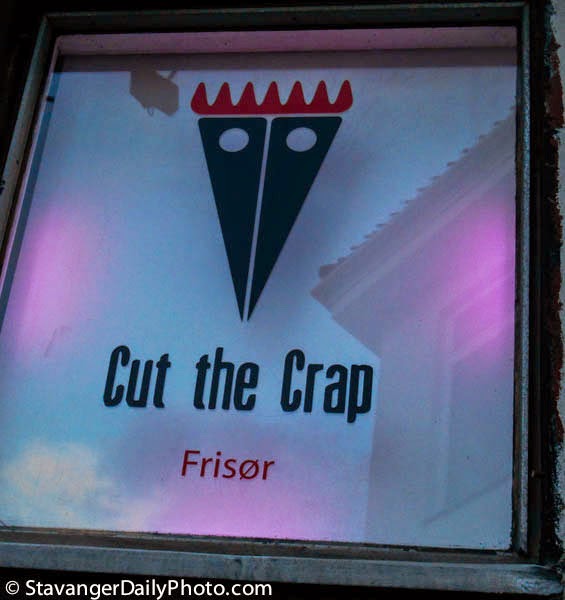 Whoever came up with the company name "Cut the crap" for the hairdresser saloon,
have made me smile again and again when passing.
Posted by Gunn at 20:00 8 comments: 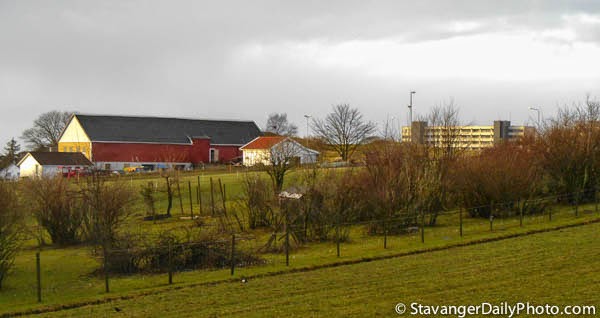 I have told you that I am so pleased that there are still areas left, farmland, open spaces, and places near to the city where you can go for walks ( jogging , cycling etc.)

If you are interested in organic farming, take a trip to the shop on the other side of this farm.
I am not a regular customer, but they have both companies and individuals who are true to their products.

I promise to pop in and take some photographs, so you can see what it is like.

By the way, what is your opinion about organic products? 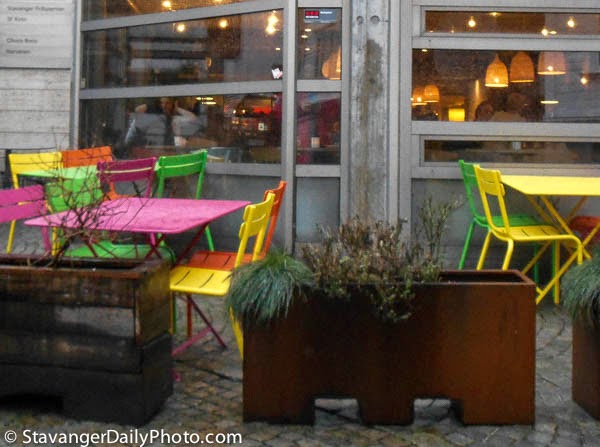 It is NOT a day for sitting outside!

Labels: cafes and restaurants, The Culturehouse. 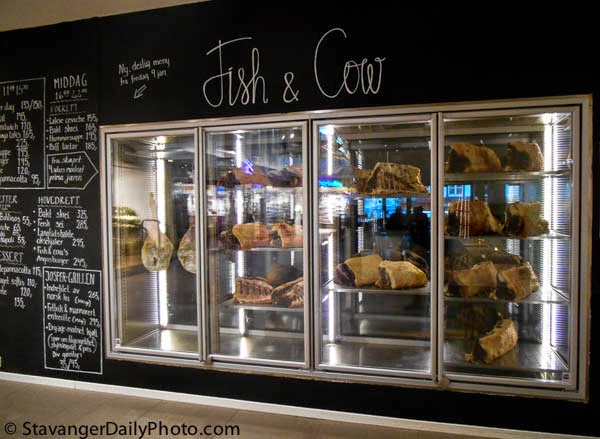 This is a restaurant.

If you enlarge the photo or look carefully, you can see people sitting there on the other side of the wall.
My blog does not create any income, and I am not paid to say my opinion, but since it is just MY blog, I can say that this is one of the places I would love to go back to. I have only been there once.

Quite a unique facade. Open from 11-23. Closed on Sundays.

The storm is still on, but not as bad as yesterday. I have just kept indoors, as most people have done.

There was only ONE stand at the market place yesterday. Strange, but perhaps it has to do with the weather?
Posted by Gunn at 09:48 10 comments:

At the culture house there is currently an exhibition on that has received a lot of publicity after what happened in Paris.

It is work done by a group of international cartoonists.... who have been given refugee status in cities where they can work and live without being afraid of what will happen to them and their families.

I had a quick look today. I did not see any police or security people....

But I think it is an important message, both the info about the artists, and their actual work.

It should be noted that this exhibition was planned long before the events in Paris. 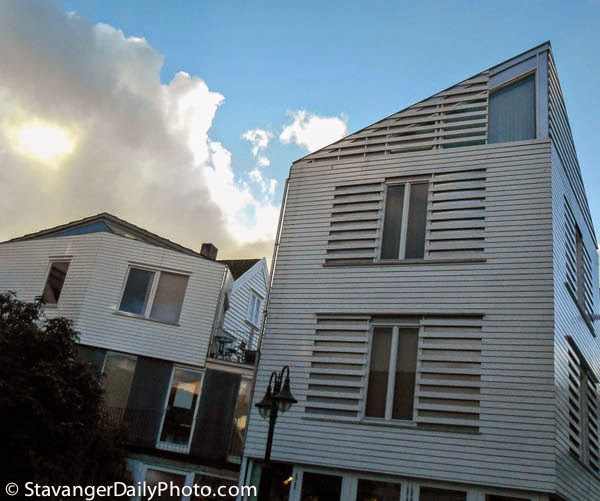 On the news today! 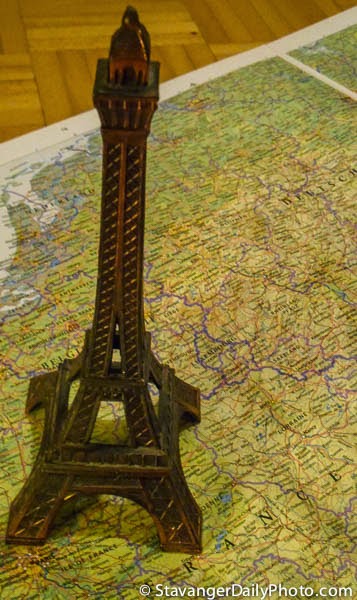 What happened in Paris today was so barbaric, horrible and evil!

There are so many of us who feel sorry for the French people, and are worried for the democracy and the terrors that are now taking place in the hearth of Europe. 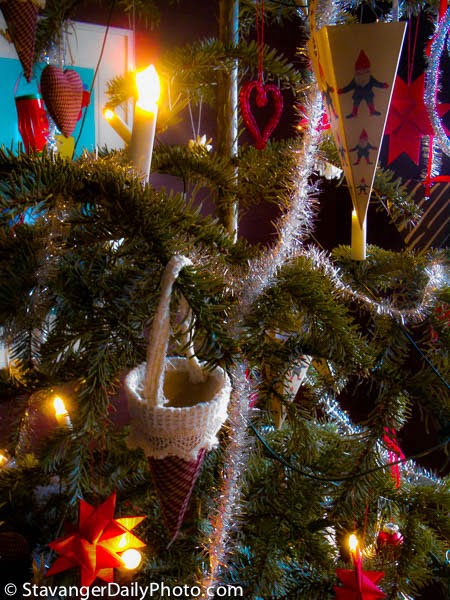 So when is it time to get rid of the X-mas tree?

(Most places the trees end up as compost.)

I have to admit that we have christmas lights out in a tree in the front garden.
Looks pretty in the dark!
The snow has gone.
We have plenty of rain and wind.
Not that cold, down here on the south west coast of Norway. 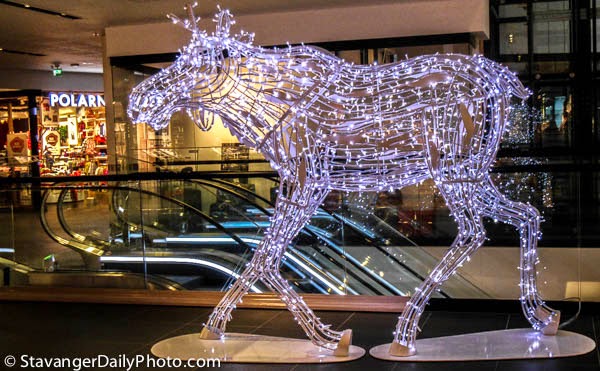 Look who I met at Sandnes, at the new shopping mall!
Tacky or not? Well I thought it was different, creative and quite stylish.

I like the new shopping centre in our nearby town, situated only 12-15 kilometres south of Stavanger.
It is quieter here than many other places, and the service (and parking) is good!

The SALES are on. 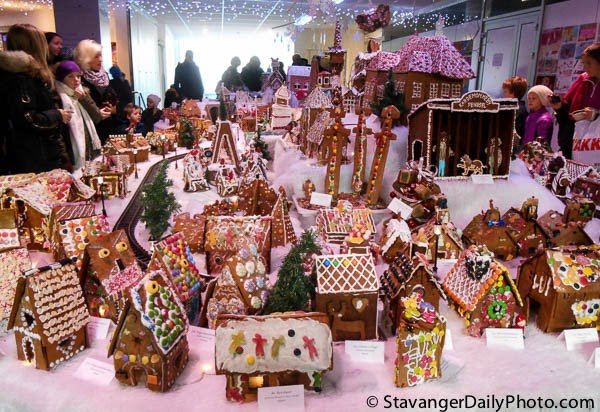 It is over now, - the city full of Gingerbread Houses.
Lots of work had been put in to the display in the big hallway at Stavanger Aftenblad.
On the blog, you can see more images from previous years, by clicking on the labels under the text.

It is cold and slippery outside. I prefer a quiet afternoon inside with my tea and books...
Lazy Sunday is good:)
Posted by Gunn at 16:10 10 comments: 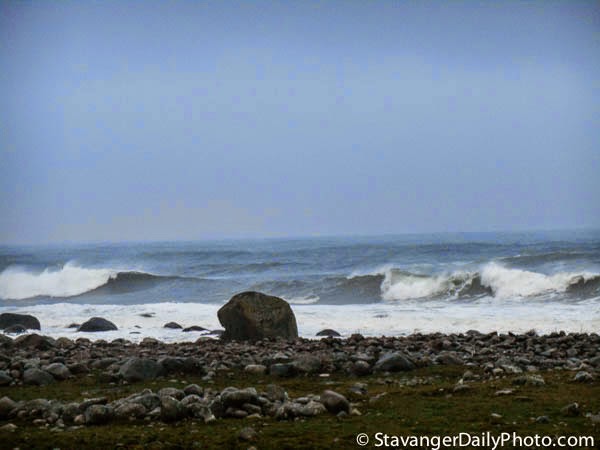 
It is a fresh and windy weekend.
I had to use some of my Icelandic outfit today:)
This is the North Sea, photographed along the coast, south of Stavanger.
Posted by Gunn at 16:56 8 comments: 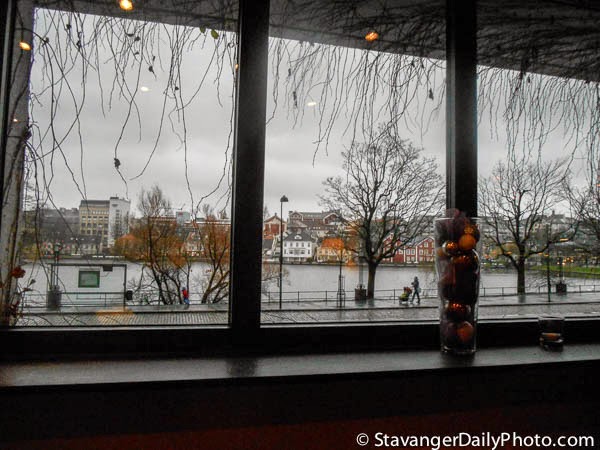 A view over the little lake, Breiavatnet. 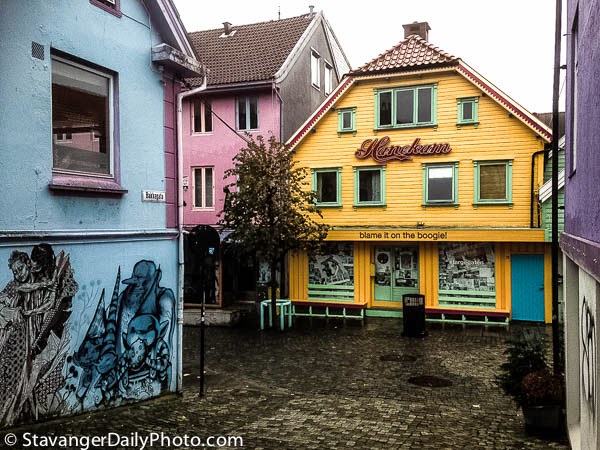 The first of every month, the City - daily - photo - community have a theme photo, with images from all over the world. Take a look here

My choice is from a part of town with colourful houses.

The yellow house, used to have a wonderful shop selling ballet stuff....
The window decorations were fabulous!
It is sad that small businesses can't make it!
Even "Sjokoladepiken" is in trouble!

I hope there will be more LIFE in the narrow streets, in the months to come.