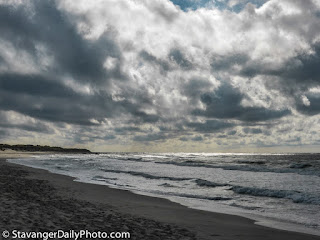 What I call a bonus, is to live so close to the North Sea, the coastline and the beaches.
You can reach several of them if you head south and out of the city.
This is Orre, about 30-40 minutes by car from the city centre.
I love the open landscape, and I love these places for long walks. It is probably one of the things I would have missed the most, if I should have moved away from the area.
Posted by Gunn at 17:26 12 comments: 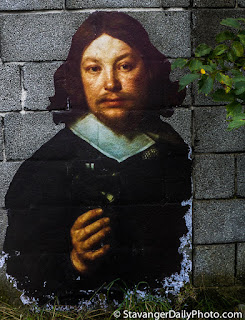 I don't know who this is, nor who the artist is.
But I found it quite unusual and interesting.
Posted by Gunn at 10:30 11 comments:

Stavanger would not have developed to the extent it did during the industrial period, if it wasn't for all the women who worked very long days in the industry.
In the beginning they did not have permanent jobs and they worked very hard, sometimes even bringing their children to work.
Later as laws and regulations were introduced, things became better.

This is a fine example of one of the many workers who made Stavanger famous, in this case, working in the canning industry.

The statue is made by Hugo Frank Wathne, and is placed at what we call,
Østre Bydel (East part of the town).
Posted by Gunn at 18:46 6 comments: 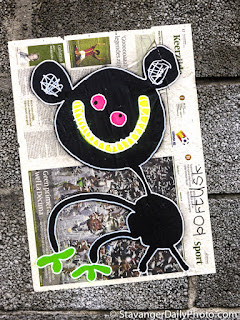 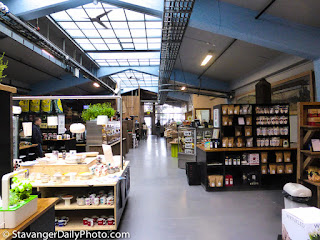 Mathallen. The new food hall in Stavanger has been open for a few weeks and this week I had a look inside around lunch time. It looked very tidy, very quiet, also interesting, and had some nice locally produced products..... So I did some shopping.

I hope they will manage to run the place and develop the concept.

Where is the best food hall that YOU have been to??
Posted by Gunn at 19:54 5 comments: 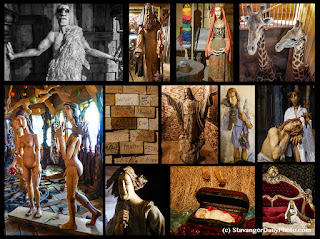 There are some creative people around, and when I visited Noah´s Ark I fully understood that this has taken time to make. More than 50 people worked for 16 months to build it. Here are some images that show some of the things you can see inside "The Floating Bible Museum". It is 70 meters long, 10 meter wide and 13 meter high. The Dutch owner,artist and producer, Aad Peters, has said in several interviews that it is important to learn and know about our own culture, and I can see that this might be visited by many families and school classes too. 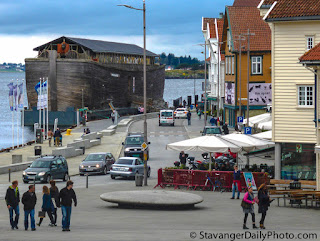 "Noah's ark" has arrived in town.
Tomorrow I'll show you images from inside.
It has been in Kristiansand, and will be here for five more weeks, before leaving for Bergen.
Posted by Gunn at 13:43 14 comments: 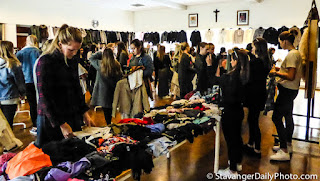 Renate Schilling, a young economy student, has together with at least 15 of her friends done a brilliant job collecting and organising an event that took place today. Clothes, shoes, jewellery etc. were given to this centre, where they held a second hand market. All of the money raised goes to refugees from Syria. Well done!!

Good to see that so many got involved in an important issue. 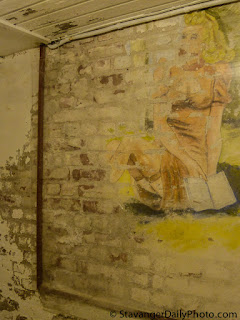 Another mural made by German soldiers, seen at the same place as yesterdays posting. 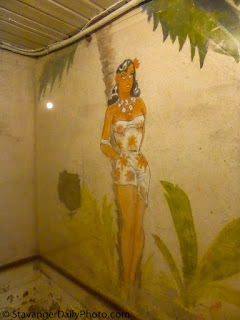 This is an old mural.
It is made by German soldiers who occupied Norway for 5 years under the 2WW.
Some of the soldiers have made this in the cellar under Obrestad light house.
Posted by Gunn at 15:49 10 comments: 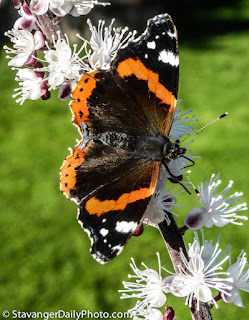 Out in the garden this morning.
A sign that summer has not quite given up yet?
A nice day today.
Posted by Gunn at 11:34 11 comments: 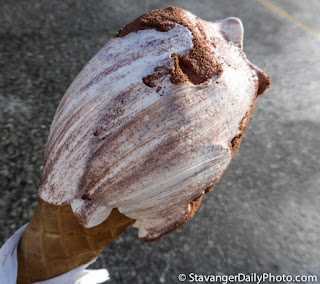 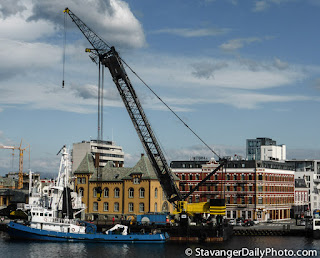 A view seen from Old Stavanger over to the harbour area.
Posted by Gunn at 16:42 8 comments: 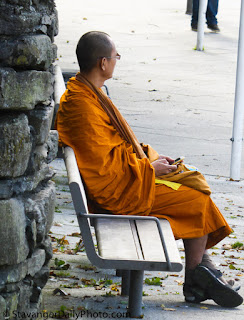 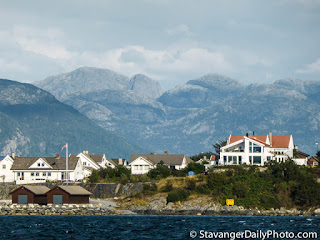 Turning 180 degrees from where I took yesterdays image, I saw this.

The day after the election. 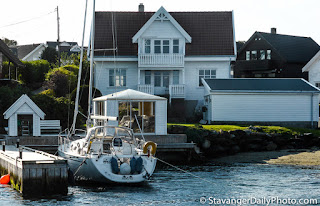 The election is over.... the left wing parties did fairly well and the Green Party did amazingly well.
Our mayor in Stavanger will keep her job....and life is in a way "back to normal".

We have rain and it feels like autumn is here now after a weekend that had a summer feel to it.

I could have shown you an image of rain, but have chosen to show you a house out on one of the islands that you get to after crossing the city bridge and a few more smaller bridges.
They have a wonderful place!

Not a house for tall people. 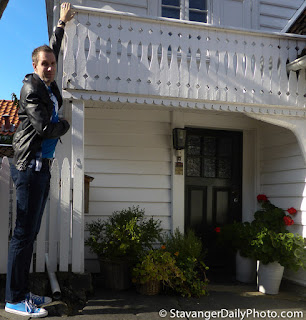 This is a very idyllic house in Old Stavanger,
but I guess NOT a place to live for tall people like ; Christopher from South Africa :-)
Posted by Gunn at 22:35 10 comments:

Who to vote for ? 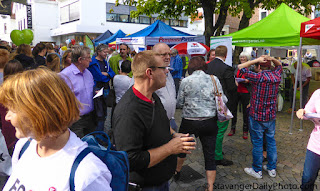 Who to vote for ?
Yesterday there were so many politicians at Arnageren, the area in front of the Culture House.
Tomorrow, is the big day for the local election. THE ELECTION DAY.
Not many hours left to decide who to vote for.
So let us hope that the best politicians will win!
Posted by Gunn at 22:47 6 comments: 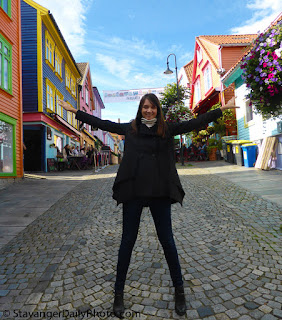 This is TANYA from Lithuania who is married, staying and working in London.
This weekend she is visiting the Stavanger area.
Here you see her in the most colourful street in town. 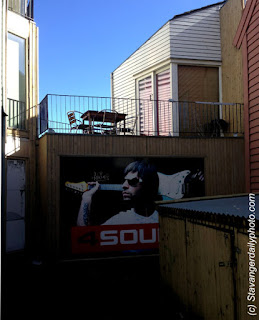 Urban living next to the Culture House in Stavanger.
Blue sky today and a feel of summer with +19C. 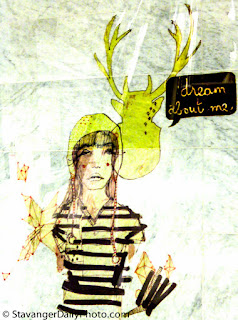 Seen on the wall at the shopping mall Kvadrat.
This is an image from my archive, taken some weeks back.

Today is one of the very few days that I have not taken one single photo, not even with my iPhone.

I have struggled to just stand on my feet, even more to go to work and stay there.
After work I have just been sleeping ..... and that is what I intend to do after writing this.
Go back to bed and SLEEP and not dream about anything.....
Posted by Gunn at 20:25 6 comments: 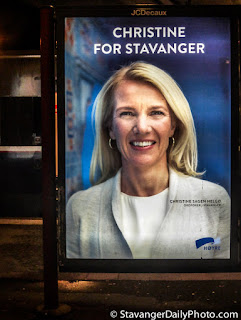 We have a local election coming up....
This is the Mayor of Stavanger. (On one of the many posters that are put up all over town.)
She and the conservatives have had good results year after year.
This time it may change.
Time will tell.

The train has arrived. 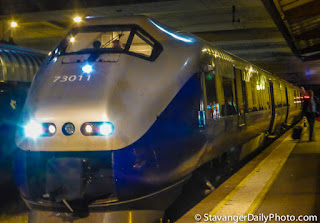 It takes 8 hours with the train between Oslo and Stavanger.
Goodnight :-) 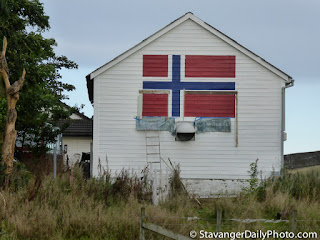 Why do some Norwegians paint a Norwegian flag on the wall ?

Why do some go to Spain, Greece etc. and sit at a restaurant with a Norwegian flag on the table?
And why is it important to even put up a flag on the balcony at hotels when on holiday?

Is it just pride?

Life in the bushes. 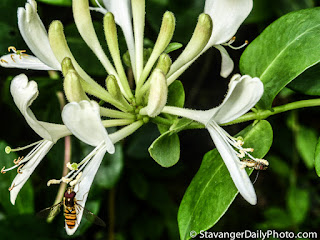 The flowering season is soon over.

Who is this man? 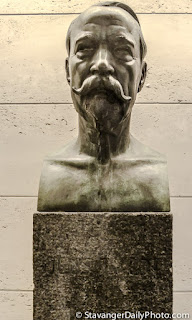 This is a bust of JENS TVEDT
(1857 - 1935), who wrote more than twenty books. He was a teacher and later also worked many years as the boss of Stavanger Library. (The bust is made by Ståle Kyllingstad)

It is shown also in yesterdays image just outside the entrance to the library. 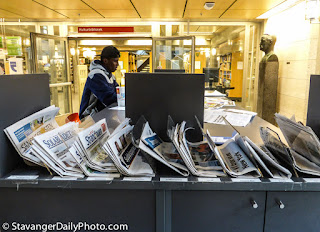 At the library there is a good selection of local as well as national and international newspapers.
They also provide an opportunity to read more than 3900 newspapers / magazines from all over the world, using the library card and their computers..... So there are lots of choices.

Which newspaper is YOUR favourite?
Do you use internet or paper editions? 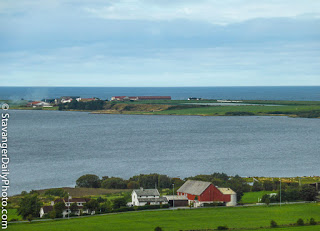 What a nice walk we had this morning!
Open landscape and a view out on to the North Sea.
Just a few raindrops today. Colder and time to find the woollen clothes again.
Posted by Gunn at 20:54 8 comments: 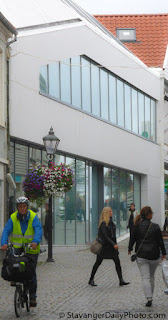 ZARA, the fashion shop will open it's doors soon.
I could hear lots of work going on inside, but the building is ready.
There will be two floors with clothes for women and one floor for children and men.
I guess lots of people are waiting for the grand opening day... 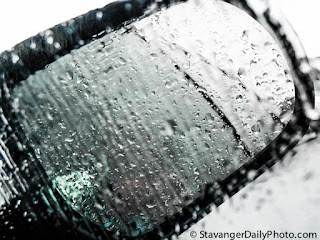 September is here. It feels colder.... and we have had plenty of rain today.
Posted by Gunn at 21:26 9 comments: