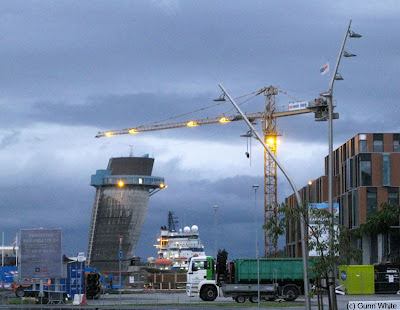 (This photo is taken 06.40 in the morning..... )
As at Pisa in Italy, we have our own "leaning tower" here in Stavanger, well, a suburb called Hinna.
The tower is 50 meters high, and it leans three times as much as the famous Italian one.
I have only been up there once.
It was built as part of the oil industry, to prove the technology for building large columns at an angle and with different thicknesses.....
These days there is a lot of building activity going on in the area near to the tower.
Many new flats are being built on the right hand side, and many people have already moved in.
Some have a nice view, and some probably can't see more than straight in to their neighbours flat.
Posted by Gunn at 21:48

You're braver than I am. That's leaning just a little too far for comfort!

Wow, that is definately defying gravity! I'm wondering why it's leaning like that and how much farther it will go :D

Wow, that is a leaning building. Great shot. Thanks for your comments on our travel site (www.vivalavoyage). We now have posted Buenos Aires, Argentina photos. have a good week!

Pisans made a mistake and were lucky, this was on purpose and is quite daring. Very nice shot, it really looks like the crane is going to straighten the tower!

A novel idea but not for me.

It's interesting, but I would be nervous in there!