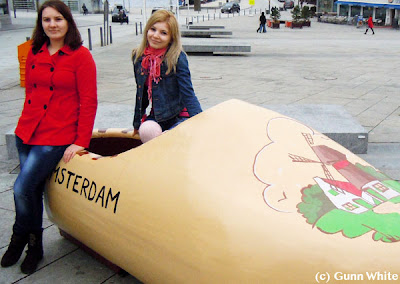 The old market place is still fairly empty, but the reason that the Dutch clog has been put here, has another reason than just being an interesting new landmark. It is an ongoing competition via our airport's site on Facebook, and KLM, the Dutch airline, who have just increased the number of daily flights to Amsterdam to 5 !:)

The two young women Maria and Laura, are not Dutch, nor Norwegian, they are from CLUJ NAPOCA in Romania. They live and work here in Stavanger.
Who knows, they might even win a trip for two to Amsterdam!:)
So look out for even more Dutch items placed in different locations around the Stavanger area.
Posted by Gunn at 19:59

nice shot and interesting advertising on behalf of KLM! certainly would catch my eye!

A clog, how original, nobody wears clogs here anymore, only some farmers. But is a commercial item to attract tourists. And when they come we have to explain again "no we don't wear clogs". But it is nice we can fly five times a day to Copenhagen to sea if everybody is a mermaid there. (just joking)

biebkriebels, your comment is funny! It's the same everywhere I suppose, like people expecting to see movie stars in Hollywood or berets in Paris. But there's something to be said for keeping these symbolic traditions alive. There's a sweetness to it, a history.

I saw one of these floating ina a canal in Amsterdam. It had also an outboard engine...