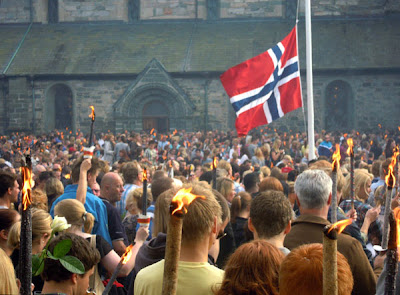 I wanted to share more than just one picture tonight.
Tonight more than 75,000 people turned up for a "fakkeltog", a parade with burning torches starting at the cathedral and progressing around the lake Breivatnet.
This was for people to pay their respects to those who died in the terrible events that occurred in Oslo and on the island Utøya last Friday.
Many people brought flowers which were placed on the lake. 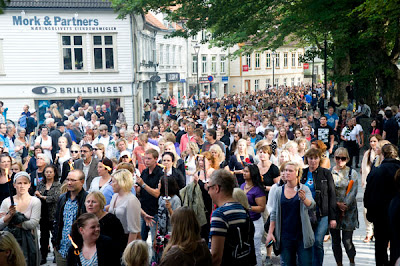 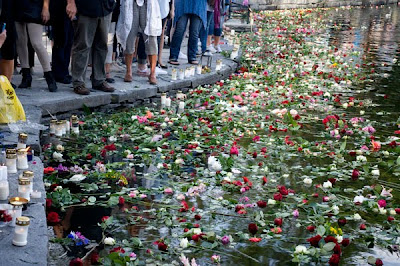 A deep bow in respect from Athens, Greece.

Thank you for sharing the pictures. It is all so very sad and hurtful. Those families and all of Norway didn't deserve what happened to them. Senseless.

The photos speak volumes about the solidarity of the Norwegians.

Gunn, thank you for letting us participate in this way.

Coming together to express sorrow must be a universal impulse. I add my condolences and sense of outrage at these foul deeds.

Such a tragic event and these flowers beautifully symbolise the unity of Norwegians supporting each other!

Gunn, I am so sorry.

Beyond words sad occasion Gunn, thanks for sharing these touching images with us.

Very touching this way of remembrance.

We are all standing in solidarity with Norway.

Gunn, my thoughts are with you.

No words would suffice for this.

Very touching Gunn. Words are not enough, though I thought Jens Stoltenberg made a good effort.

The photo of the lake brings tears to the eyes for the loss to families, to your country, and to the world. Prayers

Our thoughts are with you all

My heart is with all of you.

these are such beautiful, powerful, healing images.

I was very impressed when I saw this on tv. Yor photos are just beautiful, Gunn.