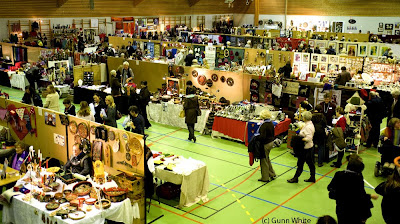 Todays shot is from the annual "PWC-Stavanger Arts and Crafts fair" which is on today and tomorrow. It is a huge event!
This photo is showing less than half of the area, where creative people sell things they have made. I am always impressed. This year I bought a few presents, and two things to myself. Luckily it was not as crowded as it has sometimes been.
PWC was founded in September 1970, and was than called the Petroleum Wives Club,
a club only open for women whose husbands were in the oil industry.
Now the club is open to everyone who would like to join, and the club is re-named
“People Who Connect”. They have several meetings and activities all year around.
Posted by Gunn at 16:17

Oooh I'd like to pay a visit to this festival

Are the crafts expensive?

Stavanger husfliden! Rosemaling, hardanger, osv. I'd spend every last krone at a place like that (if my wife didn't beat me to it)
Hilsen fra Hagen - God helg

I love this kind of festivals! I usually spend far too much money there! But... Petroleum wife's club sounds like something out of that movie with James Dean, Giant.

Petroleum wife is really funny. Usually these fairs are a nice occasion to shot some good photos...