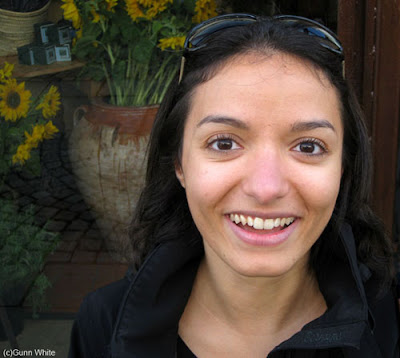 Stavanger is an international city. It is also the “oil capital”, with many oil companies based in the region. Several other companies also have employees from quite a range of countries. Well, then it became necessary to have an International School etc. etc.

From what I understand out of the stats from the council, most “foreigners” are from Britain, followed by Poland, Denmark, Sweden, Germany, U.S.A. France, Russia, India and the Netherlands.

Today I want you to meet RAJA, from Aix en Provence in France.

Her husband works as a geologist, and they have been living in Stavanger for three years.

She has been attending a Norwegian course, and I have to say that I was really impressed by how well she speaks the language! She works at the shop “L´Occitane” in central Stavanger.

Great smile, very good portrait. It's a long way from Aix to Stavanger, you have to tell us more of these stories.

Great potrait. Are you doing a series of strangers?

Nice to see a portrait every now and then. Hello Raja!

I think you captured her lively spirit!

I think I have met her there at the shop and she really speaks norwegian well. I too was surprised, even though I didnt know for how long she has been living here. Prejudice I guess..... ;-) Nice pic as well!