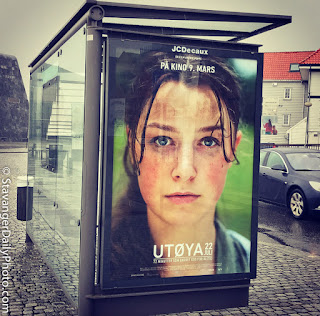 I will never forget what happened here in Norway on July 22. 2011
69 people lost their lives on the island. Total 77 people.
A Norwegian man had planned and carried out these two evil attacks by himself.


This week a new Norwegian film had it's premier, and the film is about what happened at UTØYA, the island where so many young people lost their lives.

People are saying that this is a strong film.

I have not seen it. I guess the intense marketing, with posters perhaps in all bus shelters, will make this a film that many will go and see.

It was a horrific day.

I imagine the film will end up here.