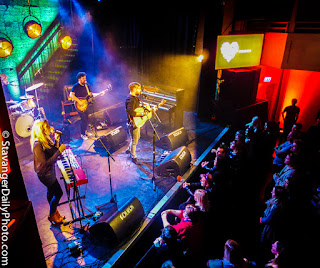 The Stavanger Band "Hear Me Roar" also played at the concert last night.

I got a feel of country style and Neil Young. I have never seen or heard them before, but they are doing well and have had several concerts around the western part of Norway.

The concert was a gift from a bank (Sparebanken Vest), who had this event and concert on an evening where the bank gave money/awards to good causes.

I got impressed about the bank who actually supported groups and charity in different fields, as long as they were not political or religious. So many people who do charity work for free. Impressive the time and work they put in to it!
Posted by Gunn at 13:07

Terrific to have a bank support contemporary music and other events for the public!

Interesting name for a band.

I'm happy to find your blog. Great photos. I will observe. Thanks for sharing.

Very colorful photo. Their name reminds me of the great old saying about the "roar of the greasepaint and the smell of the crowd." :)

This is a fantastic shot! I'd imagine they would love to have it.

Nice that the bank sponsored this music event.

They have a good name :) Arianna