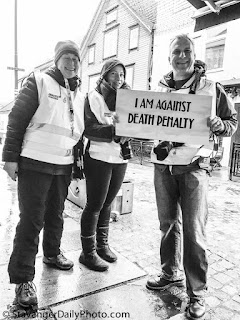 These 3 people were out in the rain a few days back, doing volunteer work for Amnesty International.
It was a campaign to make people aware of what is happening in Saudi Arabia.

They were enthusiastic about taking photos of passers by with the sign, and collecting signatures.
(The big smile came after we all realised that the first two pictures I had taken had the sign upside down.)
Tonight there will be an event both at the Cathedral, in the streets, and at the Culture house
The mayor Sagen Helgø will give an appeal and the nominated Oscar film
"Cities of Ghosts:Raqqua" will be shown at the cinema.
This is a global event that will be marked in many other places

If you are in the Stavanger area and are interested you will find Amnesty International at the Culture house  from 16.30 and at the Cathedral from 17.30 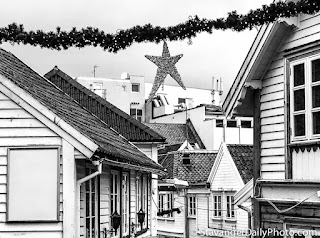 Roofs and windows in town. 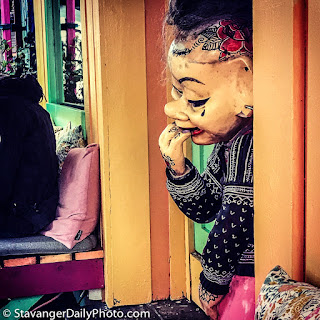 Such a grey day today, so it is good to see some bright colours.
This is outside HANEKAM , a coffee / bar place at Øvre Holmegate.
Posted by Gunn at 08:55 2 comments: 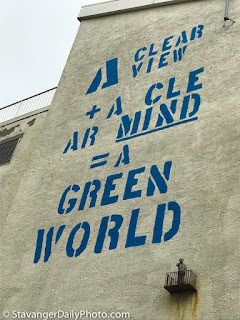 A clear message.
Stretart on the wall. 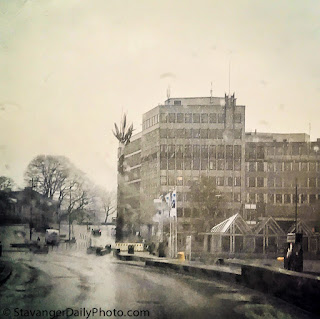 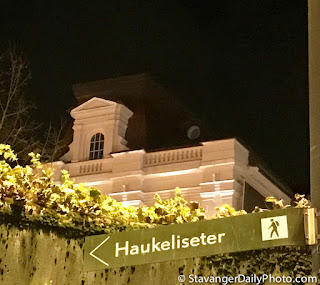 On our way to the Theater last night I suddenly saw this sign.

HAUKELISETER is 250 km. away, and it takes more than 4 hours to drive there by car.
Thinking about it, we do have other signs saying Denmark and England, so why not HAUKELISETER?

It is a beautiful place, and I would love to go there again!

Out on the beach. 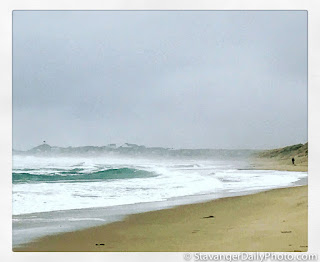 Out on the beach yesterday afternoon.
It was very windy, very cold and very nice to walk there with our dog.
Posted by Gunn at 08:09 5 comments:

A look in to the library / Culture House. 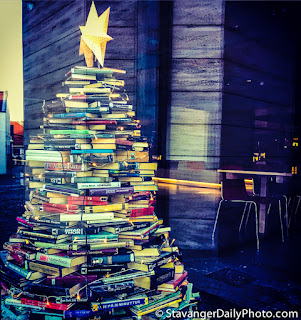 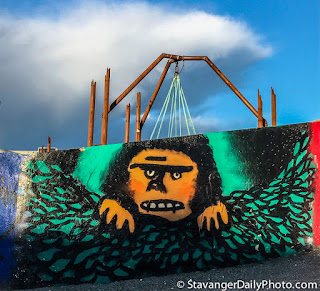 This is another glimpse from the Geopark.

https://www.yr.no/place/Norway/Rogaland/Stavanger/Stavanger/?spr=eng
Posted by Gunn at 07:37 No comments: 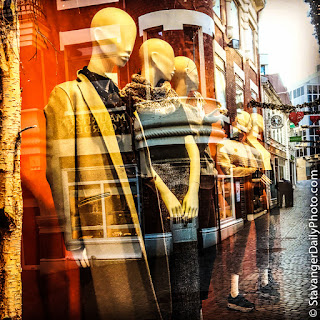 What to wear
or
what not to wear.

Streetart at the Geopark. 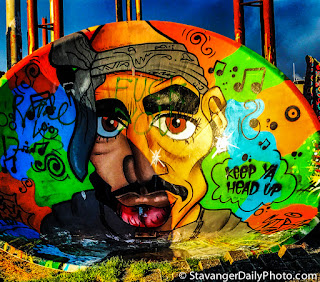 Streetart at the Geopark in Stavanger.
Posted by Gunn at 11:25 1 comment: 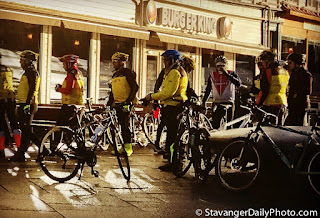 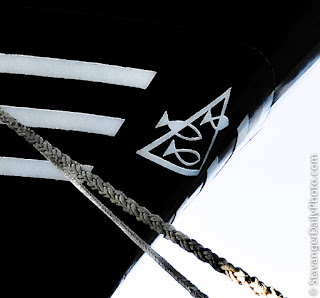 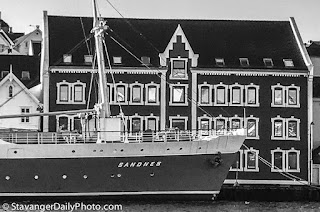 SANDNES in Stavanger.
Posted by Gunn at 12:42 3 comments: 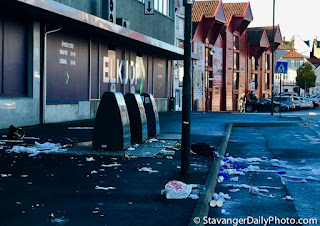 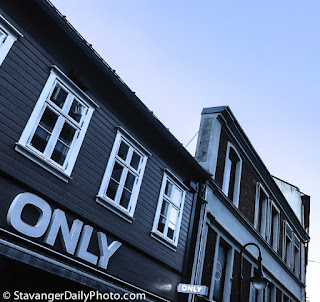 KRIA, a beauty from the south. 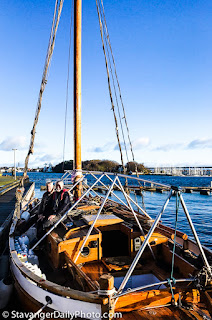 A beauty from the south, a Colin Archer boat made in Randesundet (near Kristiansand) back in 1983.
The couple had had her for 15 years and enjoyed lots of nice holidays & trips.
I met Astrid and John on Sunday, and I have to say that KRIA looked very well kept.

They told me that there is more info. on "Finn", and yes, the photos are a lot better than my snapshot, so do take a look if you know the site and are interested.
Posted by Gunn at 14:02 3 comments: 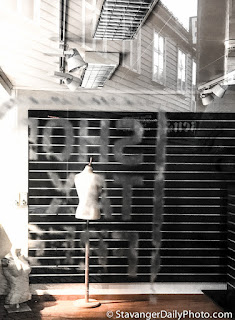 Not much life in this shop at Prostebakken.
Posted by Gunn at 05:54 2 comments: 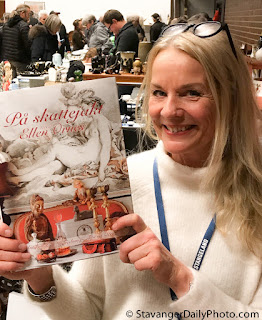 This weekend there is a big event at Figgjohallen, south of Stavanger.
An eldorado for collectors and buyers of all things collectable, vintage, retro and of course antique.

So nice to take a look.

This is Ellen Ørnes. She has been the number one on Norwegian TV, as well as writing in magazines and her own books telling about all things that have to do with the different periods and styles etc.

For those who wanted a valuation of old items there were opportunities to do so.
People came from many places in Norway to show and sell from their collections. 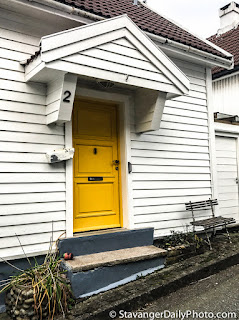 Number 2 is a white wooden house.
The entrance door is bright YELLOW, and that I like!

In Norwegian I would have said: Gult er kult.
Which means: Yellow is cool.
Anyway, it sounds better and it rhymes in Norwegian 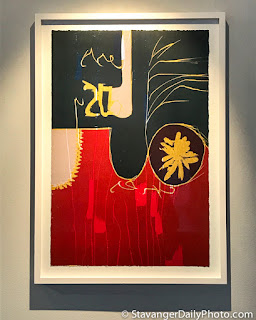 Tomorrow is the big opening day for the new exhibition "Spina", at Kunstgalleriet in Madlaveien.
The artist Magne Furuholmen will be there at the opening at 13.00

It will run until December 10th. 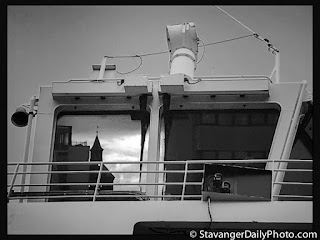 Kongsborg from Torshavn (Faroe Islands) is visiting Stavanger.
Posted by Gunn at 23:34 2 comments: 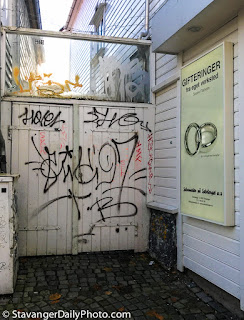 Autumn in the city. 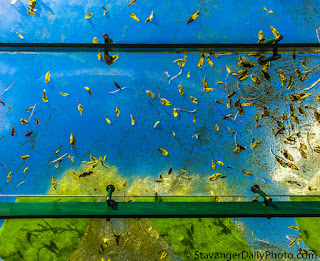 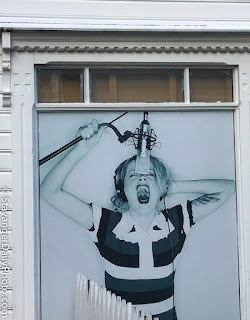 I just liked the creative way this shop does their advertising.
I don't know who the photographer or the model are, but WOW it's great work!

HappY new week everyone!
Posted by Gunn at 11:12 5 comments: 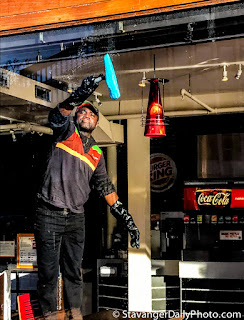 Some people have to work on Sundays.
If you walk through town on a Sunday morning, you will see lots of window cleaners in action.
Here is one doing a good job!
Posted by Gunn at 14:20 6 comments: 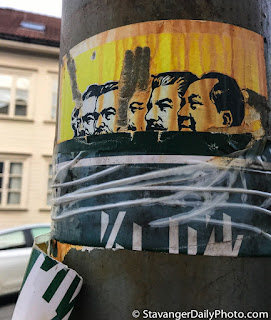 Retro communist poster seen on a lamppost in town.
Posted by Gunn at 17:03 1 comment: 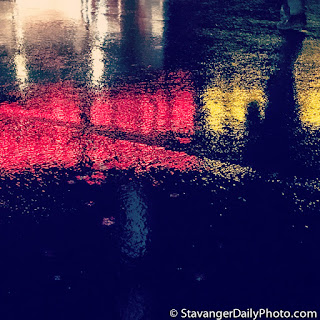 The hotel Radisson BLU with a fantastic view!
Lots of work going on, but I guess they are opening the doors again soon.
Posted by Gunn at 20:01 3 comments: 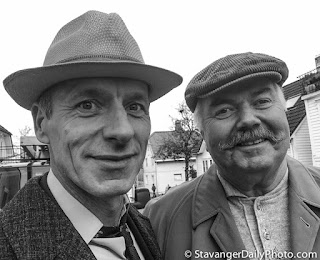 The filming of "LYKKELAND" finished in Stavanger yesterday.
It is a film about what happened in the 1960's when our city changed in to the OIL CITY.
Hopefully we will see it on NRK in the autumn of 2018.
There will be 8 TV episodes, and there are still lots of work to be done.
Filming abroad is on the agenda now.

Here you see two stylish men, Mr.Rakovic and Mr.Sandvik.
They worked as film extras and I had the pleasure to see them and others in action.